Korowai tribe is a tribe wtih a population of 3,000 people and it is one of the world's most bizarre tribe. They lived in Papua and their culture remain isolated from modern civilization. They have many strange ancient habits and some of them is also a cannibal.

They live by their own tribe in a way that is quite strange, they build their houses above the trees is very high so as not to be disturbed by animals. 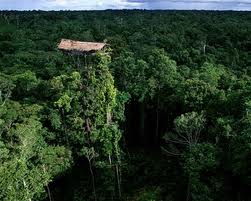 Korowai tribe itself is one tribe in Papua, which does not use koteka. The men of these tribes were forced to put his penis into their scrotum and at tip of his cock tightly wrapping them with a sort of leaves. While the women only wore short skirts made ​​of sago leaves, wich sago is their main meal.
Posted by Unknown at 8:03 PM

Email ThisBlogThis!Share to TwitterShare to FacebookShare to Pinterest
Labels: Tribe