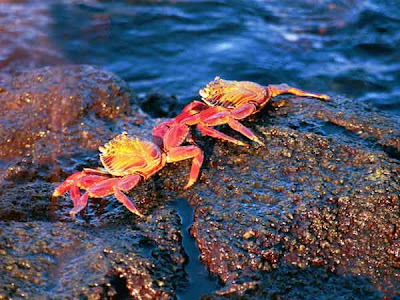 Fishing for crabs isn't exactly a dream sport for those obsessed with hygiene. A rustic outdoor sport, it is still a favoured once-a-month outing for rural teenagers and some enterprising adults in those parts of Goa which are far removed from the tourism spotlight.

Crabs must sense when Jonathan Fernandes, 27, is around. Jonathan is one of the most avid crab catchers from Varca, a village on the banks of the river Sal, around 60 km from state capital Panaji.

"We set up crab traps usually during high tide as chances of catching a crab increases. But one can get good crabs even during low tide where the water is deep," he says, explaining the nuances of the sport.

Eaten curried, roasted or often fried, crab meat is succulent and sweet. But catching them is not a very pleasant task at all, unless you like handling putrid flesh - which is prime bait for this claw-toting beast. Nested in rocky nooks and crannies along river or creek bottoms, they come out in droves attracted by the smell of decomposing flesh.

Crabbing in the many estuarine waters of Goa, as well as in the submerged fields, is done with the help of handmade traps. A trap called a 'cobllem' in Konkani consists of a circular ring -- made of metal nowadays -- with another rod running across the diameter. A loose hanging net is secured to one side of the ring.

Hanging from the diametrical rod is generally a piece of shark's skin, fish waste, smelly chicken entrails or pork legs to lure the crabs. "The bait is tied firm so that the crabs, which are lured, keep tugging at it. This done, the trap is then lowered into the deep water where it rests at the bottom. You can sit on the bank and sip on your beer in the meantime," Jonathan told IANS.

Crab catchers generally set up more than half a dozen traps at a time in different parts of the water, with a nylon rope running from each trap tied to a piece of bark or rocky spike on shore.

Now, after you've done your bit to get the crabs, crabs do their best to help you out.

"Once you yank the net up, the crabs caught below simply refuse to let those above them climb out of the net. Then they pull them back with their claws," says Anzil Fernandes, another avid crab catcher from Betul.

Incidentally, this peculiar, selfish trait exhibited by crabs is of particular significance to Goa. According to popular social lore, a 'Goan crab' is that person who is jealous of his peer's success and does his best to pull him down.

Anzil knows his crabs well. Colour and weight are significant parameters which determine the taste of the crabs.

"We let go the smaller ones as they do not taste good. Also if you release them, they are probably going to visit your trap once more when they put on some muscle," he quips.

And if Anzil can judge the taste of a crab by looks, his friend Joel, a teenager from the same village, can determine the gender and hence can tell which crab goes into which cooking pot - all with a mere look.

"The female crabs are usually curried as the spawn are known to add a unique flavour, while the male ones are either made into soup or gravy. An experienced crab catcher will tell the sex of a crab with one look and confirm his finding by weighing it," he says.

"On a good day, one can get a crab every two minutes," Anzil told IANS.

Crab catching done, they are then dumped into an open pail to be carried back home. No they don't climb out of it, they're Goan crabs - they love to pull each other down.