Miles Austin is healthy and ready to play 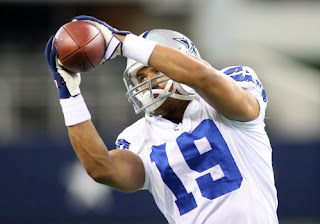 Cowboys wide receiver Miles Austin said his hamstring is healthy and he should play with no issues in the Sunday night season opener at the New York Jets.

Austin missed the last three preseason games with a hamstring injury and the Cowboys have been cautious with him.

The lack of practice time with quarterback Tony Romo doesn't concern him because the two have played with each other the last six seasons.

Of Romo's 118 touchdowns, 16 have gone to Austin, tied for the third most on the team since he became starting quarterback in 2006.

"Yeah, I'm ready, as long as he says that I'm good," Austin said after Friday's practice. "Obviously we've been working with each other six years now [and] we have a good feel for each other. He knows how I run, I know how he throws the ball [and] we’re just trying to do things."
Posted by Unknown at 8:08 PM