Most Beautiful Place in America 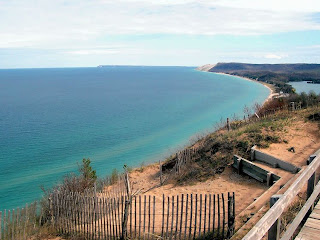 It's the kind of favorable publicity you can't buy.

"I would classify it as a bonanza," said George Zimmermann, vice president for Travel Michigan, source of the prize-winning Pure Michigan tourism campaign. "It's obviously not just the fact that Sleeping Bear won, but the extensive piece they did on the area ... that was a lot of network air time about Michigan."

Shortly after the segment aired, visitors to Sleeping Bear were mentioning it to National Park Service personnel there, said Dusty Shultz, park superintendent.

People around Sleeping Bear didn't need the ABC award to know they live in one of the most beautiful places on Earth, said Mike Norton, media relations director for the Traverse City Convention and Visitors Bureau.

"We're hoping and confident that it will bring a lot more attention to the area, in a good way," he said. "It's going to bring the kind of attention that helps guard places like the Dunes from being neglected."

Shultz said about 60 percent of the park's 1.2 million annual visitors are from Michigan.

A 2009 survey found 47 percent were first-time visitors to the 71,000-acre park while 25 percent had been there six times or more. About 56 percent said the Dunes Lakeshore was the primary reason for their visit to the area.

Shultz said the Park Service estimates Sleeping Bear generates about $78 million in annual revenue and supports about 1,800 jobs for the area.

During the ABC broadcast, some Michigan businesses got some big shout-outs, including Cherry Republic, a purveyor of cherry-based food products, and Crystal River Outfitters, near Glen Arbor.

Celebrated chef Mario Batali, who summers in the nearby Leelanau Peninsula, was shown extolling the wonders of the Lake Michigan lifestyle and suggested dining at the Hearth & Vine Cafe near Suttons Bay.

At the 70-seat restaurant on the grounds of the Black Star Farms Winery, server Julie Keck said the publicity made for "pure insanity today."

"We knew it was the prettiest place," Doan said. "We're glad everybody decided to join us."

In July, Sleeping Bear Dunes National Lakeshore beaches were deemed the best on the Great Lakes in the first-ever Top Five rankings for the region by the renowned Dr. Beach. In April, Sleeping Bear Dunes' Point Trail was listed first for Hike-to-Views in the National Geographic book, "The 10 Best of Everything National Parks."

The park was nominated for the "Good Morning America" Most Beautiful competition by Jim Madole, of Grand Rapids, who wrote: "It is peaceful and serene, a place for gazing out into the world, night or day, and realizing that the universe is truly a magical, majestic mystery, and humans are just a very small part of it all.

"Here at Sleeping Bear, I sit in awe and wonder at the perfection of Mother Nature."
Posted by Unknown at 6:14 PM

Email ThisBlogThis!Share to TwitterShare to FacebookShare to Pinterest
Labels: Most Beautiful Place in America